Collecting and saving, also known as hoarding, has always been a fundamental part of my studio practice. I am known to accumulate bits and pieces of junk, trash, leftover wrappers, and odd materials in general. During my residency at Mana, I’ve accumulated scrap wood, foam, coffee ground pucks (courtesy of Dominic Sansone), a cast iron pot, Cheetos bags, dozens of egg shells, and various bits of appendages I’ve steadily been making. In the studio, I tend to play and tinker, combining bits of this and that to make a Frankenstein creation, an assemblage of sorts. I’ve been making and acquiring a large library of “parts” but the tricky step is seeing how they all come together. 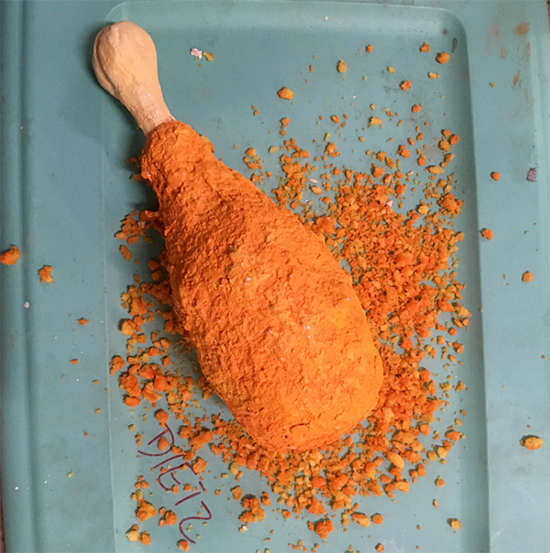 With the pickle project in the fermentation stage, I’ve been working on a few other things. I’ve been doing research, and chanced upon a series on Netflix called Rotten that digs deep into issues in the food industry. I started to think about the idea of “fake” food. In capitalist societies, food is often over processed and manipulated and we come to associate unnatural colors and textures with specific foods. For example, the traffic-cone-orange of Cheetos and other snacks is meant to simulate cheese. No cheese has that glow-in-the-dark, neon-orange but we know that the color implies that the snack will taste “cheesy”. It functions more at a semiotic level than actually bringing forth what it visually suggests (which is the definition of the simulacrum). Another flavor of Cheetos is tinted with fiery red, in order to communicate that it is “spicy”.

With these ruminations at hand, I ask: What will the food of the future look like? If we keep going at this pace, will we forget what actual cheese looks like and come to recognize only the hazmat orange that is produced in factories? (will it become a representation or sign that has lost its original referent?). Will hunks of it grow in a vault somewhere, waiting to be harvested?

I’ve also been enjoying seeing all of the pipes in Mana. Pipes are like the guts of a building. With masking tape, paper, and wire, I’ve been recreating pipe arrangements from around the building, as well as creating imaginary and mysterious pipe systems. What would these systems be producing? What sounds would they make? What factory would they be part of? They started to grow off of a wooden frame but I’ve decided that they need an equally wonky but delicate set of scaffolds to climb and wrap around. I’m thinking a lot about moving parts and the ability to rearrange and combine things that don’t necessarily go together. I’m making the small pipes and appendages, and then taping them together, cutting them apart, and reworking them as I go along. I like that the material gives me the ability to constantly change the composition. This has helped me have more of a flow in the studio and feel less pressured to pump out a “finished” product. 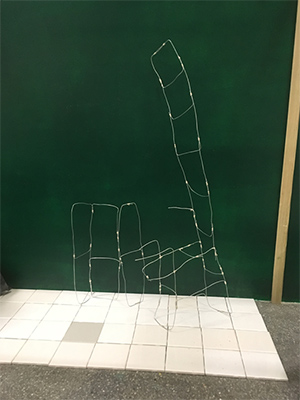 One of the amazing parts of being in Jersey City is its close proximity to NYC. I’ve been able to visit gallery openings in Chelsea, Brooklyn, and the Lower East Side. Sometimes the crowd is more interesting than the artwork, and I love to watch the interactions and dynamics between the viewers. Dominic and I, as well as some ISC friends also visited the Print Club night at the Newark Print Shop. For ten dollars, we were able to work in the open studio and use all of the materials and equipment in the shop (http://www.newarkprintshop.org/). Artists and members of the community come together on a Wednesday night to chat and participate in the open studio.