This exhibition catalog reminds us that performance art and some art made from discarded and daily use objects –and ingenuity — began in the 60s as playful investigations of process, concepts, psychology, and aesthetics. I taught intro to Art History for decades when Germano Celant was a star curator in New York and Europe, also often seen in a 20th Century Art film series discussing process-oriented art — for example, Franz Klein painting nude women blue and rolling their bodies on paper – and why this was art. Many artists in the 60s & 70s, including John Lennon and Yoko Ono and Lynda Benglis, did nude performance art, but it was not necessarily process-oriented.

Ileana Sonnabend’s tastes were conceptual and unorthodox. By exhibiting and collecting Arte Povera artists, she influenced many in the United States and Europe. In addition, Sonnabend introduced American artists, including Jasper Johns and Robert Rauschenberg, at her Paris gallery in the 1960s and at the Venice Biennale. Germano Celant, the curator and critic who defined Arte Povera in 1967, has spent decades documenting its artists: Giovanni Anselmo, Pier Paolo Calzolari, Jannis Kounellis, Mario Merz, Giulio Paolini, Michelangelo Pistoletto, and Gilberto Zorio – all men. Marisa Merz was included in other solo and Arte Povera venues.

Installation view of Ileana Sonnabend and Arte Povera: Curated by Germano Celant, on view at Lévy Gorvy from 11. 2 – 12.23.17. Courtesy of Lévy Gorvy, Photography by Tom Powel (Merz Igloo on left, Zorio on right.)

This catalog contextualizes their exhibitions by  interspersing these artists’ works and comments  into lists of all artists whom Sonnabend showed between  1962-2014.  Celant’s and Sonnabend’s 50-year friendship gave Arte Povera its roots and its audience.  This comprehensive overview of Sonnabend’s unconventional exhibitions and collection reminds us that liberated arts patrons are rare and occasionally affect  art markets.

The catalog’s cardboard outer cover and earthy blue/green/grey-toned inside cover demonstrate how Arte Povera artists used simple materials viscerally.  The texture, materials, and hues are notable as is Celant’s organization. First he establishes the context of his fruitful friendship with Sonnabend and her impact on the art world. Next: chronological images and artist statements show each artist’s significant works between 1962 and 2014. It is clear that Celant and many others devoted considerable hours and research to giving this catalog its strong presence.

As Celant describes the art scene’s rivalries and its shift from Paris and Europe to New York, he places Ileana Sonnabend at the apex of promoting internationalism: “Ileana provided a broad vision that was not only expansionist but also oriented toward globalization” (p.21). Celant became the historian documenting the rise of the new artists, writing a detailed monograph about 32-year-old Giulio Paolini for Sonnabend Press in 1972. 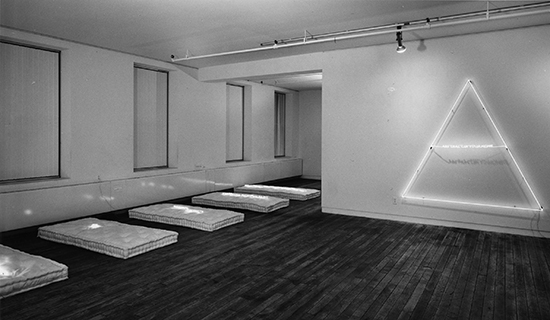 Pier Paolo Calzolari’s first exhibition in New York featured ABSTRACT IN YOUR HOME (1970), a triangular neon wall work with four bare mattresses. In a rambling essay punctuated by the phrase, “I’d like to let you know,”  he enthused, “I want expansion democracy madness alchemy insanity rhythm horizontality… I desire to be elementary… to commit acts of passion…”  Calzolari’s neon and mixed media installations play with horizontality, with each  room’s architecture, and with viewers’ imaginations.

Michelangelo Pistoletto was the artist who introduced Sonnabend and Celant to many of his Italian peers. His search to merge image and reality led him to develop paintings on mirrors in which viewers seem to interact with painted images of scenes from everyday life. In a 1964 writing, he mused, “Indeed, since it is not physically possible for me to enter, to investigate the structure of art I must bring the picture into reality, creating the fiction of being on the other side of the mirror” (p. 37).

Mario Merz was known for his Igloo first shown in New York in 1971. This primitive transparent small structure with a neon sign about the Fibonacci code (1 + 1 = 2) made a big impact on the arts community, and its larger iterations seem, to me, like an early version of Louise Bourgeois’ spiders.  The first igloo was exhibited at Lévy Gorvy in its distressed state, but originally, it was intact.

Jannis Kounellis staged many installations and performances at Sonnabend .  He wrote that Ileana Sonnabend “…allowed artists freedom in making exhibitions, and this was significant.  Ileana never interfered.” (p. 182) He wrote in 1975, “Tradition does not mean exaltation of the past, but the need to order actions anew so as to have a present and not a mistake. Credibility comes from the values you reveal within an operation in the present” (p. 220). For one exhibition, Kounellis painted the gallery walls yellow, wore a white mask, and rode in on a horse.  In 1980, he filled the gallery with large sheets of ghost paintings inspired by Munch. By 1987, Kounellis was saying,  I have wanted only very beautiful things.

I have measured the distance from the objective.

Installation view of Ileana Sonnabend and Arte Povera: Curated by Germano Celant, on view at Lévy Gorvy from 11. 2 – 12.23.17. Courtesy of Lévy Gorvy, Photography by Tom Powel (Merz Igloo on left, Zorio on right.)

Gilberto Zorio’s art was perhaps the most elementary  and surprising. It was tactile, it could hiss, be heavy, be above one’s head, or constrict movement.  His untitled black object hanging near the ceiling is attached to ropes that are, in turn, attached to the tops of walls in a spider-like formation; the ropes then dangle down to conger both nooses and lifelines. This catalog captures the spirit and character of Arte Povera.