I want to talk a bit about context – specifically, what sculpture can do to our experiences and expectations of public and private spaces. It’s all about shape-shifting.

I’m drawn back to this because of an exhibition recently opened at the Maclaren Art Centre in the city of Barrie, Ontario, just north of Toronto. Laura Moore’s One Man’s Junk is a seemingly simple and understated installation: essentially a wooden shipping pallet carefully stacked with a number of carved limestone sculptures – 1:1 scale – of old cathode-ray tube computer monitors. The contextual part of this has to do with the work’s placement in a small, interior courtyard at the gallery that is shared with an adjacent café. There are plants in concrete containers, and a few tables and chairs. Moore’s work sits off to one side atop a concrete slab. 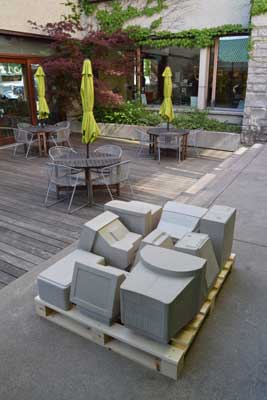 It would be all-too-easy to call One Man’s Junk “discreet” based on nothing more than its small size and its location within this public/private space, but in reality it is anything but. The best metaphor here might be that of a black hole: The presence of Moore’s tidy accumulation of hand-carved limestone works in fact radically distorts and reshapes this space at multiple levels including (but in no way limited to) how abandoned technologies continue to exert a tight socio-economic grip upon us. Whether, say, dumped into the corner of a little-used space, or dumped (in a much more massive, industrial-scale way) onto another part of the world, out-of-sight-out-of-mind is a fiction. An illusion. And a socially, culturally and (of course) economically pricey one at that, one that might end up costing us our home.

I mention Laura Moore’s interventional installation at the McLaren (it’s up until mid-October) by way of brokering an evocation of two important sites in Canada where the sculptural interceded into rather set and understood spatial contexts and did its shape-shifting thing. They’re both all but gone, now – well, sort of. One was urban, the other rural. 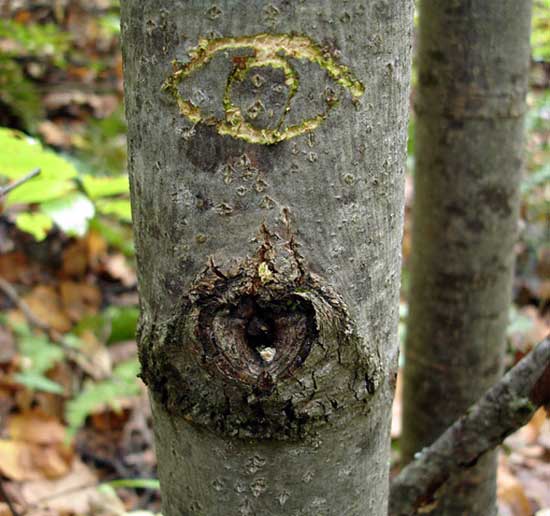 Peter von Tiesenhausen, ‘the land is the canvas,’ 2006 (detail, photo by the artist)

The latter was called The Tree Museum and was situated about two hours drive north of Toronto near the town of Gravenhurst, and at the end of a winding, rutted mile-long dirt road. Founded in 1997, it was curated by artists EJ Lightman and Anne O’Callaghan, and over the course of its fourteen-year tenure, 80 artists used the museum acreage (320 of them to be exact, owned by a Toronto private school) to create site-specific and largely temporary installations. Now, this isn’t wild, untrammeled nature we’re talking about here; this is rugged, rocky land (part of the Canadian Shield) with thin soil and numerous bogs, and it was entirely logged-out a hundred years ago, covered now with second-growth forest and abutted by a growing number of nearby cottages.  Working with the fundamental guiding principal of “we tread lightly upon the land,” Lightman and O’Callaghan included work by environmentally-based artists like Peter von Tiesenhausen, whose ‘the land is the canvas’ from 2006 comprised eye-like shapes he incised into the bark of over 1,000 trees on the property using only his thumbnail. It was an extension of ongoing work he had done on his own rural property in Alberta, and which he successfully used to legally block oil and gas exploration upon it.

See? Context really can change everything.

At the opposite end of the spectrum, The Toronto Sculpture Garden was about as urban as you could get, located on a tiny parcel of land (80’ x 100’ in size) in downtown Toronto that had once been a parking lot. Opened in 1981 as a joint venture between the city of Toronto (which owns the property) and a foundation created by the family of benefactor Louis L. Odetts (which funded and administered exhibitions), it played host to a couple of exhibitions each year that addressed the contexts of this place.

And they were myriad. In 1996, for instance, Liz Magor built a small log cabin on site and landscaped trees and bushes around it for her Messenger. A year later, James Carl installed a gently arcing line of nine pop machines emblazoned with an image of Niagara Falls upon them (mirroring the artificial waterfall that was part of this site) for his Fountain. In 2003 Charles Goldman’s Infinitely Intersecting Orbs comprised a gridded playground of fifteen functional (albeit, slightly modified) tetherball poles across the lawn, and before that Micah Lexier installed his time-based The End and the Beginning October 10, 2001 to April 2002, a brick wall that rose incrementally over a period of fifteen weeks (402 bricks laid each week), completed fifteen weeks before the show itself ended. Shape shifting in the most literal sense.

Both The Tree Museum and The Toronto Sculpture Garden are now all but gone. The Toronto Sculpture Garden ceased its exhibition programming in 2014, though it has been employed since then as a venue that has been a part of the annual Nuit Blanche events held in Toronto since 2006. Shape-shifting remains a viable possibility here; the property itself remains in the hands of the City of Toronto.  Further north, the Tree Museum ceased formal operations in 2012, though many of the works there remain on site. The temporary scarring of von Tiesenhausen’s mark-making has long since healed over, but a work like Tim Whiten’s Danse, skeletal figures sand-blasted into a rocky outcrop of Canadian Shield, will endure far longer and so maintain its context-shifting role amidst whatever the changing fortunes of this property might entail – at least for awhile, anyway.

Gone, but by no means forgotten. Both sites – and, yes, even venues like the small interior courtyard of the Maclaren Art Centre – underscore sculpture’s radically transformative ability to switch the channel, to alter the proverbial course, to rework context…to shape-shift. More than any other medium, I would suggest, the very thingness of the sculptural can upend, even subvert, the narrow conventions and expectations of place, can suggest something else – something other. Richard Serra’s now destroyed Tilted Arc may have pissed off a lot of office workers forced to confront it every day, but it did make them acutely aware of the role of context and what a physical space actually meant to them. And Robert Smithson’s Spiral Jetty may be situated in such an isolated location that few people actually ever experience it first-hand, but it can be seen from space, and images of this almost otherworldly structure meaningfully play into our fundamental understanding of place.

Sculpture’s otherness matters, and that’s become even more important as this place – our very planet – is being deformed, perhaps beyond all recognition, by our rapacious quest for even more.