I first encountered the work of Sarah Saunders in the late 1990s when I was the curator at the Confederation Centre Art Gallery in Charlottetown, Prince Edward Island. I was fortunate enough to include her in an exhibition of sculptural ceramics, and had the opportunity to write about her work for a catalogue, and then later review her work in magazines.

Though I knew Saunders as a ceramist doing sculpturally interesting things with clay, she is, not surprisingly, so much more than that. Even a cursory look at her background demonstrates someone not zealously adherent to the narrow tenets of medium-specificity but far more broadly oriented and encompassing: after acquiring her B.Sc. in biology, Saunders then went on to study dance in Toronto, and drawing and sculpture in Paris, before then returning to Canada and getting her BFA from the Nova Scotia College of Art and Design in Halifax. And all of it shows up in her work.

The Saunders I first encountered in the late 1990s was (amongst other things) a maker of books. Ceramic books, to be precise, her sculptural take on clay’s ancient role as a medium for permanently preserving textual inscription (ancient Sumerian cuneiform embossed on clay slabs, for instance). Saunder’s series of earthenware books are codices each comprising two “leaves” (some quite thick) bound together by metal hinges or leather straps; in one – Unfinished Song (1999) –her biological background comes directly to the fore, text on the verso page describing the processes by which seeds are spread by a plant is matched on the recto by inscribed images detailing the process of the division of a cell. Song of Sanctuary and Refuge (1999) has a pentagonal shape to its two leaves (that, when the book is fully closed, evokes an intentional visual reference to a house), the outer surfaces embossed with the text of a poem by Emily Dickinson. Opened, the book reveals the tattered remnants of a bit of wallpaper on the verso side and the tiny bones of the rib cage from a small animal on the recto arching protectively above the embossed image of a clock face.

A later body of work involving earthenware cutlery – enormous knives, forks, and spoons – led to the gallery installation Assembly Lines (2011). A row of large inkjet prints on paper depicting flatware – silver spoons, actually, of variously elaborate patterns – hang on a wall behind a long, makeshift table comprising a couple of pieces of plywood resting on sawhorses. This variant on the plinth as a kind of domestic table is set not with tableware but rather with a series of textile-based artefacts done entirely in unglazed white porcelain. They’re 1:1 scale porcelain sculptures of period clothing – dresses once intended for newborn children – standing upright on the table surface. Arranged in front of them are corresponding ceramic knit bonnets as children once wore. The body of work also includes a number of clay handkerchiefs.

Saunders has even worked underneath the artefacts of human culture and into the specifics of human anatomy using porcelain. She’s sculpted lungs of clay and lace in Breath Suspended (2003), and with Lumbar Blue Willow and Lumbar Rose (both 2011) reproduces a portion of the human spine, each glazed ceramic disk elegantly detailed with a floral decoration as if it were part of a set of china – which, of course, it is. The body – or a portion of it, anyway – indeed become artefact.

But of course her work has also extended outside of and beyond the myriad and ongoing sculptural possibilities of clay. Saunders is no ceramic purist – clay is a means to an end. So she’s worked with salt as a medium, for instance, encrusting tree branches and chair spindles with the stuff, and, in the series Doilies (2014) heavily encrusting and impregnating the cloth of these decorative textile artefacts with coarse salt and shaping them into vessels as they dry until they begin to resemble, say, beautiful marine shells or corals.

Saunders’s aesthetic includes the exploration of the temporal via site-specific installations. Like Rhizosphere (2013). Extending from the base of a mature maple tree growing in an urban Charlottetown park, Saunders traced out its root system across the lawn using white sand and minute glass chips that were luminescent at night. Heaviest and thickest nearest the trunk of the tree, the representative lines of roots weren’t simply drawings on the sod, but sculpturally raised features that gradually tapered out furthest away at the tree’s drip line. And for Cryosphere in 2012, she suspended an enormous nylon net filled with 400 lbs. of ice from a crane parked outside the Confederation Centre Art Gallery in the heart of downtown Charlottetown, a work that lasted as long as it took for the ice to melt entirely away as darkness fell (eight hours, as it turned out). 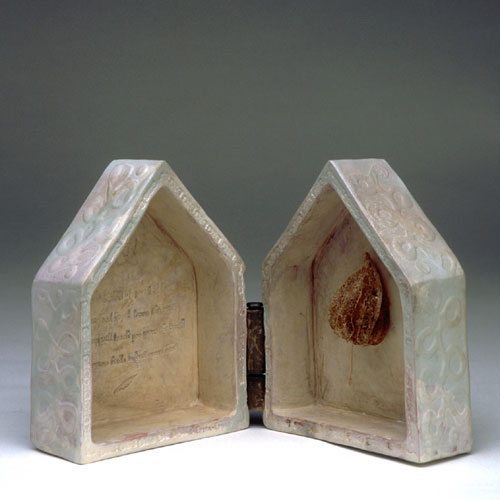 After I had left the Charlottetown in 2000 and returned back to Ontario, I eventually lost track of Sarah Saunders’s work. My bad.

Won’t happen again, I can assure you.