August 10, 2016 By intsculpturectr in On View Tags: John Anderson Leave a comment

On the subject of his printmaking, Martin Puryear told Art 21 that he tries to “make work that’s about the idea in the sculpture without making a picture of the sculpture.” It’s an aspiration that resonates throughout his exhibition at the Smithsonian American Art Museum: the first major traveling museum exhibition that positions his sculpture in direct relationship with his printmaking, as well as his drawings and drawing process. 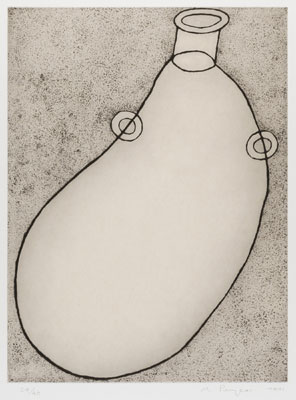 It’s of little surprise that a sculptor draws and plans. What is, perhaps, of surprise within this exhibition is the scope of the drawing and printmaking in the exhibition: of the 72 works on display, only 14 of the pieces are sculpture. Some of the drawings date back to Puryear’s time in the Peace Corps, from 1964–1966 And while many of the early prints feel as if completed by a different hand, they possess the same DNA of those familiar forms that repeat throughout his career: the head, the vessel, the quadruped, the circle.

Puryear’s work has never seemed in step with contemporary trends. There is a timelessness to his work in much the way the sculpture of Brancusi and Giacometti evoked the early primal forms of pre-historic cultures. In fact, the relationship to Brancusi is certainly more direct, with Puryear’s repeated use of the head. At times, he buries the face in the floor: whether as a white bronze, or repurposed into “Vessel,” a wire-frame construction of dense white pine, that stands seven feet tall and stretches 15 feet in length. Much like the head can be filled with knowledge, the “Vessel,” in this instance, is filled with a wire-mesh ampersand, as if suggesting what next to fill the vessel with.

While the archaic craft of many of the sculptural works are never so slick as to deny the nature of the hands that made them, from a distance there is at least a suggestion of the machined modernity from the time period of their creation. The drawings, and in some respects his return to printmaking after a 30-year hiatus, possess more of the deliberate immediacy and liberty of a petroglyph. The lines a little looser, at times less refined. The mark at times clouded by the presence of fingerprints smudging and marring the surface. If printing (or drawing) is about getting to the idea, it’s an idea he has been meditating on for well over 25 years. The bean-like form—whether called “vessel,” or “head,” or “untitled”—has been emerging on paper in various states and stages dating back to 1990. Arguably, as the exhibition would suggest, it goes back further: to the young man in the Peace Corps drawing portraits of villagers in 1966.