July 20, 2016 By intsculpturectr in In the Studio Tags: Dorothy Hunter Leave a comment

In “On Visibility”, body parts are simplified in form but softly hyperreal in finish; they proliferate and mutate, organs becoming cancerous rather than cells. The sculptures’ alluring deep pigmentation and smooth faces – made in a combination of casting, ceramic and 3D printed processes – are also the source of their visceral body horror. Whoever, and whatever, they reference has been translated a step too far and physically corrupted, concentrated down then multiplied, to shift from physical embodiment to over-representation.

Meticulously ordered pieces envelop one another, but yielding materials still maintain agency in Rainey’s tightly knit arrangements. In Face Off, a matt black porcelain head is draped over a glossy steel pole, itself a recurrent structural form in the exhibition. The face is generically featured in a way that would be alien as an actual person. Whilst apparently vulnerable when casually moulded to an imposing, informal skeleton, it seems complicit, gaining as much structure as it has apparently lost out on; it couldn’t find ‘appropriate’ form should it want to.

On expanding platforms of online self-presentation and identity making, selective visual information becomes an ever-exploitable imaging device. A single backdrop for a collection of lives – an app, say, or social media site – shapes each one with the same forces and feedback processes, making what was once a passive framework into an image’s first and foremost context. John Rainey’s sculptures combine the histories of self-imaging and making technologies, working somewhere between mass-production design processes and individual handmade forms, to explore the acceleration of contemporary issues of identity perception, formulation and privacy in online arenas. 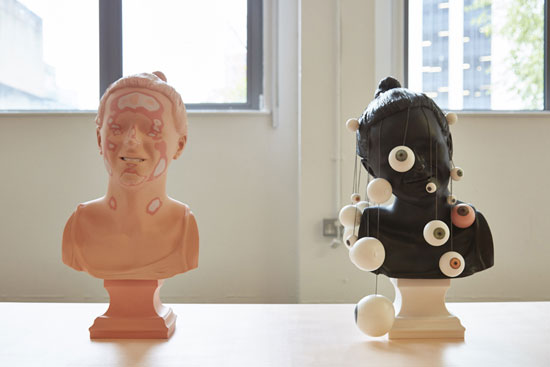 As you marry design processes and hands-on making processes together so tightly, is it necessary to begin your sculptures with a fully formed idea of what you will create? What does your conception/making process usually involve?

This varies. At times things can come fairly close to the original intention, but more often I’ll begin with a reference that I’m drawn to – a trope or a type of form, like the portrait bust, or the draped figure. Because of the repeatable nature of working and casting with moulds, I tend to work with a series of forms, or modular components. I have a library of moulds at this point that I regularly add to. For this show I introduced twelve new forms, ranging from small two-part moulds of eyeballs, to a complex thirteen-piece mould for a large portrait bust. The work then becomes more about the treatment of these modular components, the construction/deconstruction, the composition or assemblage.

Sometimes new compositions or relationships between forms suggest themselves based on the proximity of certain casts in the studio, in a kind of free association that I like. Some of my favourite work has come about in this way; it has an element of play that I’ve always felt the need to maintain.

The digital work is usually embedded deep in the process at this stage; I’ll 3D print forms to build upon in clay, or to act as models to make moulds from. Occasionally, as with Head in Hands (2016) I’ll print final objects if they exceed the limitations of casting processes. I like the idea that these are impossible objects that couldn’t exist without 3D printing to render them tangible. Otherwise, where possible, I prefer to use the technology as a way of enhancing material production. 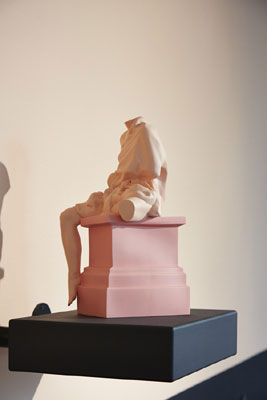 There are clearly a lot of classical Greek references in your exhibition. Where does this align for you with the show’s grounding in the issues of virtual visibility?

Sculpture has arguably given us the most enduring sense of visibility from past cultures and time periods. Experiencing the physicality of sculpted form and matter can prompt more visceral understanding than literary accounts. Yet to see classical figures and statuary as faithful representations of actual people isn’t correct; they’re embodiments of ideas, idealized constructs to be projected into perpetuity. I think our approach to our own virtual representation now has the same intent. It’s all about controlled communication and directed understanding through what we make visible.

Although my sculptures carry these references, you’re still ultimately aware that they haven’t come from the past; they have a contemporary currency. For me, using these forms establishes a level of familiarity that can be subverted, introducing ideas about where we are now, or maybe more so where we’re going. It definitely leads into Freudian territory of the uncanny – the familiar reappearing as unheimliche or unfamiliar.

Take Slice Boy (2015) which features in this show. It was commissioned as a multiple by the Oonagh Young Gallery in Dublin at the end of last year, and I made it shortly after seeing the Belvedere Torso while it was on loan from the Vatican Museums to the British Museum. I was interested in the anonymity of this ancient fragmented body, decapitated and made limbless over time, yet still one of the world’s most celebrated sculptures. It made me think of the practice of salacious self-photography that has become so prominent with the rise of smart phone cameras and dating/”hookup” apps, where bodies and body parts are cropped and composed to purposefully preserve anonymity. It’s indicative of a culture where people are very familiar with thinking about revealing and concealing, self-editing and control. Slice Boy is a take on this – but in contrast to the shorn off stumps of the Belvedere Torso, his excluded body parts are cleanly sliced, so the matter of purpose and intent there changes things. The scale is also significant as it takes the figure into a domestic, vernacular space, in contrast to the Belvedere Torso’s monolithic, public status. 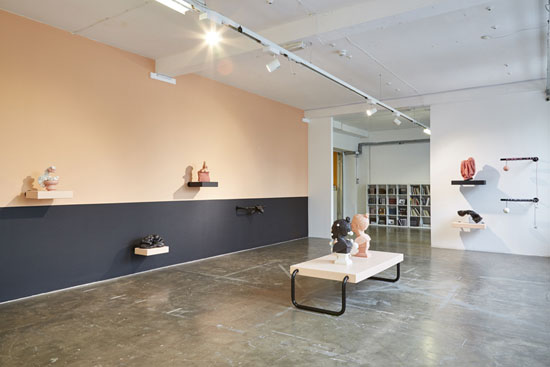 Does your use of colour hold a particular significance in the exhibition? The eye colours and “flesh”/black binary in particular are intriguing and a bit unnerving – the colour limitations/slight variations feel unreliable.

Paring back the palette and giving the show a pervasive tone, or pair of tones, I was thinking about current trends for applying digital, tonal filters to our images, particularly on Instagram. It feels reflective of reality becoming unsatisfactory to people in our heavily mediated world, and it’s another way of exerting control over the reception of visual representations of our lives. I think its interesting when you see a reaction or resistance to this sort of artifice with hashtags like “#nofilter” used to distinguish an unfiltered, “purer” class of images.

I use colour in a very flat, uniform way, the colours are homogenized; an idea of flesh that would horrify renaissance painters, blacks that seem like a negative of classical white marble.  I like the idea that some of the work borrows from the language of products, like sanitized objects fresh off the production line, awaiting their final paint job.  The idea of production in general is important, because it can lead to thoughts of staging and theatrics.

There are also visual plays on the idea of visibility throughout the show through the use of colour saturation. There are points where the display is merging with the work itself – some work struggles to emerge from its setting against comparable colours, almost camouflaged. This was all part of my focus on constructing shows that function as an experience, and establishing an environment where the work can “live” for the duration of an exhibition. I think the nuances and departures from the binary prevent it from becoming too thematic or systematic, there’s more application of sensitivity, even composition. 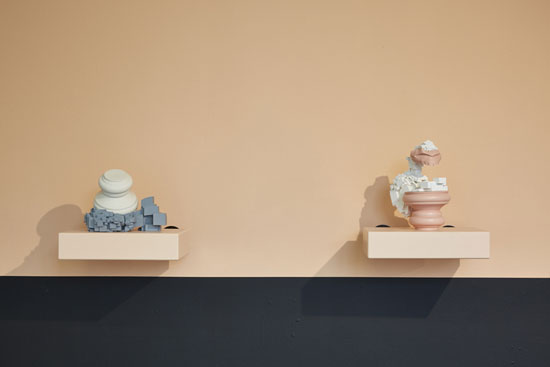 You studied ceramics and glass at the Royal College of Art. Do you feel having material-specific training particularly shaped your approach to making? Was there much scope for working across different materials and processes?

It was actually at the RCA that I introduced digital fabrication into my practice. I had come from a ceramics background and had always had a natural inclination towards materials and processes, which is maybe why virtual making appealed to me at that stage- it was a new challenge. The RCA is a big proponent of cross-disciplinary working, and I got a lot of encouragement in the path I was following. The head the Ceramics and Glass programme at the time was artist Martin Smith, and I remember him talking to me about considering appropriateness when developing ideas – what’s the most appropriate way to produce or materialise this idea, or what’s the most appropriate material? Sometimes that appropriateness can be more to do with material association and how that relates to what you’re developing.  I do follow this a lot, and it means I am always considering new materials and processes.

Coming into a digital space from a material background, understanding the weight, feel and physics of materials is an advantage when you’re working in a space where these considerations are inconsequential. It helps you see the real benefits of the digital technology. In turn, I’ve learned a lot about form through working digitally and this has fed back into the material work. It all feels very reciprocal at this point. To me, the ideal is a hybridization of the two approaches. There’ll always be a use of material in my work because I get a huge amount of energy and enjoyment from process and making.

Where do you see your work going next?

There have been many new strands of thinking resulting from “On Visibility”. The focus on exhibition design had an important role in this show, and I see this escalating in future presentations as a way of controlling how the work is experienced. I would like this to reach the point of creating immersive, heightened spaces and environments. The exhibition furniture production (steel bending, welding and powder-coating) has got me thinking about ways of integrating other industrial fabrication methods into the work itself. I think this could have a transformative impact on the scale and material language of my sculpture.

In my studio, I currently have some interesting things developing in silicone, alongside my work in ceramics. The way I treat porcelain, people often mistake it for silicone or even industrial plastic. I always enjoy this sense of material confusion, so introducing actual silicone into my sculptures is a further way to undermine established material associations and language. For viewers, this creates a level of uncertainty or instability from the outset, and I find that helpful in setting the tone of what my work may want to communicate.

The digital work will continue, and evolve. Head in Hands was a significant breakthrough for me in terms of sophistication of modeling and printing. It’s already acting as the catalyst for a new species of forms within my sculpture.