May 11, 2016 By intsculpturectr in On View Tags: Dorothy Hunter 2 Comments

Robert Altman’s 3 Women originated within a dream, and retains a telltale slipperiness. The film’s main characters, Millie and Pinky, are increasingly unpinned as they go through their intense co-existence in an under-populated desert town in California, skewing, layering and swapping any characterisation that emerges as events unfold. Their qualities are so deeply relative that either woman is hard to imagine outside of their shifting dynamic.

Jesse Jones’ NO MORE FUN AND GAMES uses the film as a contextual touchstone. Through its evocation of the complexity of female relationships, the artist toys with the interactions that make up institutions, exhibition and canonisation. The multi-faceted project has many connected processes, and, much like the film, is enriched and altered with each additional layer.

The diminished role of women in art has left their work underrepresented and culturally undervalued. The group show within the gallery space – act one of three within the project, titled “Curating the Canon” – is composed of female artists’ work that has been selected by the Feminist Parasite Institution, a collective of arts professionals and activists brought together by Jones to work with the Hugh Lane gallery’s collection. A growing process of re-alignment activates this initially straightforward premise, with the conditions in preceding gallery spaces segueing into and colouring this chosen work. 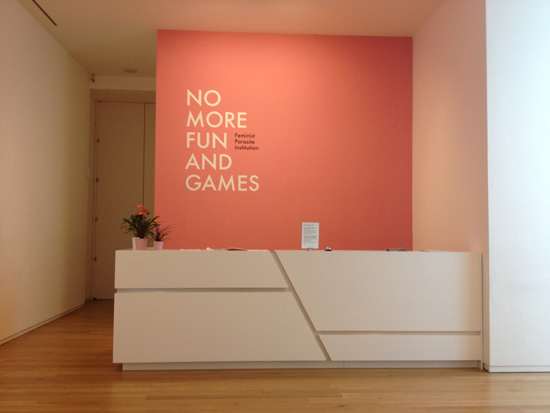 First, the institution gives itself an echoing authority in its own reception desk installed within the gallery, set against a salmon pink wall and raised high in a comical power play. It practically functions with exhibition literature and information, but also exists as a physical threshold between these two institutions – of Hugh Lane and Parasite Institute – that subsume one another.

Sound drifting in from the adjacent small space is a flute composition by Gerard Busby, who did the musical score for the original film. An anthropomorphic stand-mounted speaker plays the solo recording, composed of fast and fragmented ascending and descending scales and punctuated with longer notes. The constantly shifting time signature grates against this melodic arrangement; with no rhythm to settle into it’s faintly discomforting, a pattern that’s nonetheless unpredictable.

Two more speakers sit within the following room, their positions suggesting a path through. Shortly after entry, a black-attired, white-gloved person at the far side strides briskly across in a zig-zag pattern, cutting across the intended route. They drag a floor-length gauze curtain behind them along a rail path. An outstretched, aged arm with long pointed nails, an image that could be either inert or active, suddenly divides and visually layers the space. Getting through means skirting along the edges of the gallery and grazing past this translucent fabric.

This interplay of sound, action and image is a loaded motif from 3 Women, where information is more evocative than strictly reliable. Jones, who works primarily in film, has spoken of her aim to use the medium in a different way than straightforward moving image, and here pulls apart and draws out its elements. The image intercepts the viewer, but is in itself mediated by those participating in its presence. Is the viewer in the over-arching embrace of art history, past or forgotten women, or some version of both? Outside of the linear nature of film and the narrative that can be picked from it, it is another evocation with little solidity.

The curtain rail connects the final two spaces, an interruption in either room at any time. When outside of the group exhibition space, the show is brightly lit; within, the works are under the hazy layer, to be seen around or through. The art is mounted against a metallic wall surface, creating a mirage-like reflection, sandwiching the work between these qualities.

There’s a breadth of work on show, but the exhibition does not, thankfully, take a ‘greatest hits’ approach to redressing the balance of female artist exposure. It’s a small exhibition that wears the weight of expectation lightly and with humour: in Isobel Gloag’s 1915 painting The Woman with Puppet, the figure dangles suited men above her reclining, naked body, whilst Dietro Le Quinte by Janet Mullarny is a sculpted beast-headed woman in a dress, hands clasped whilst chomping down on a small girl. Both works have a darkly comical destruction, suggesting much more than is stated or seen. Gwen John’s two studies of a young girl share physical similarities in the mottled, dabbed paint, and also sit side by side.

Each of the seven pieces of work is a fragment of practice, a vague suggestion of something concealed and revealed in equal measure, through abstract painting, suggestive place, and myth or imagination. In this way art functions like a film still, or isolated phrase of music: ungrounded and endlessly suggestive for it.

NO MORE FUN AND GAMES is exhibiting at Dublin City Gallery The Hugh Lane until 26th June 2016.