March 16, 2016 By intsculpturectr in Book Reviews, Surveys Tags: Will Gresson Leave a comment

For the latest edition in the Critical Spatial Practice series from Sternberg Press, Israeli intellectual and architect (and Professor of Spatial and Visual Cultures at Goldsmith’s College in London) Eyal Weizman has turned his attention to protest and revolution. In a perhaps timely (and at this point arguably necessary fashion), he gives particular attention to the Arab Spring Protests that began in Tunisia in December 2010, the ripples of which are still shaping global politics at the moment with Civil Wars in Syria and Libya especially.

Weizman begins in Gwangju, South Korea, in May 1980 as students and pro-democracy activists protest against the recently ascendant military government. A photograph of protestors occupying a roundabout in the city provokes his examination of more recent protest movements including those in Egypt, Palestine, Iran, Tunisia and Turkey among others. As he explores these roundabouts and the architectural elements that have become almost synonymous with these protests, Weizman arrives at a beautiful characterisation: “like a revolution, a roundabout is an event locked between function and deactivation.” Indeed as he examines these revolutions and the manner in which they came together, sometimes spontaneously but often at least partially orchestrated (primarily through social media), a recurring symbolism emerges, particularly in protests of solidarity which spring up like dominoes across the region.

Utilising these large public spaces, protestors attempt to both figuratively and literally disrupt the status quo, something which Weizman addresses in two chapters entitled ‘Flow’ and ‘Self-Regulation,’ as he unpacks the history of the Roundabout as it pertains to Colonial intervention in the Middle East by European powers. Modes of control refashioned as modes of resistance; sites of dominant Western narratives about modernity and efficiency reimagined as spaces of autonomous demonstration and self-determination. The power of these constructions as potential public forums for protest is particularly highlighted by the destruction of the Pearl Monument in Bahrain in 2011 after anti-government protesters occupied the area in reference to previous movements in Egypt and elsewhere. Interestingly, when the area was reconfigured as an intersection it was named ‘Al-Farooq Junction,’ a reference to the Islamic Caliph Umar ibn Al-Khattāb, a figure of contention between some Shia and Sunni Muslims. It’s analogous perhaps to the way roundabouts in formerly colonised territories frequently featured divisive figures associated with the ruling hegemony, indicative of a cycle that has not yet exhausted itself in contemporary politics or indeed architecture.

Liberated Gwangju: Protesters gather at the roundabout in front of Provincial Hall in Gwangju, May 26, 1980.

These musings come together beautifully in the chapters ‘Folly’ and ‘The Round Table,’ wherein Weizman addresses his participation in the Gwangju Biennale in 2013 as part of the exhibition Gwangju Folly II. Working under a brief “to exploit the ambiguities of a folly as a critical tool of inquiry to address the condition of public space as a political arena thirty–three years after the uprising,” Weizman worked with Samantha Moafi to design a folly, described here as “architectural, artistic, or literary provocations- frivolous, luxurious, speculative, foolish, or mad acts that implicitly questioned norms and the status quo.” The huge public work was positioned outside the Gwangju train station, rather than the roundabout from the photo which sparked this text. While that initial space had been changed in ways which made it unsuitable for such a public work, the train station was actually the first site of armed confrontation with security forces in May 1980, making it all the more appropriate as a setting.

The work itself was designed to include a series of concentric circles, the size of which were determined by sites of protest in Ramallah, Gwangju, Cairo, Manama, Tunis, Damascus and Tehran (ordered here from smallest to largest). They were painted like road markings, and changed colour to become virtually invisible when it rained, an understated reminder that those tensions are always there, hidden just below the surface. 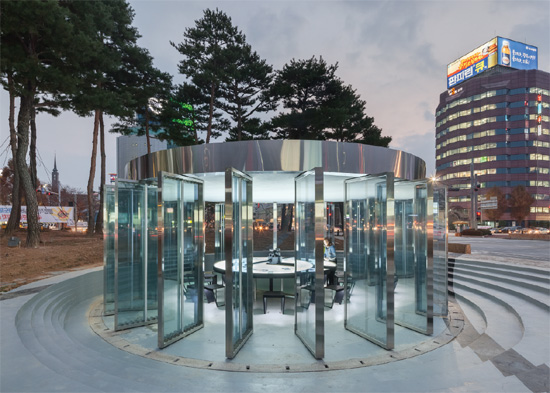 In the centre the architects designed a glass pavilion with a large table inside, something which Weizman relates to the use of the round table in Poland in 1989, when the ruling dictatorship under Wojciech Jarulezelski went into negotiations with the previously outlawed Solidarnosc (‘Solidarity’) Trade Union. This table, like the roundabouts themselves, is presented here as a space of dialogue and development, vital parts in the process whereby lasting, stable change can be constructed. But more than just that, there is a suggestion here that having the first without the second leaves these protests vulnerable to being defeated, either by a stronger and more organised government or military body, or through a muddling and mishandling of resources by the protesters themselves.

As a case study, Weizman’s book is beautifully articulated and illustrated. His forays into the history of both the political protests and of the roundabout as a space are fantastically synergised in the final work created in Gwangju in 2013 (presented here by Kyungsub Shin’s colour photographs). In an increasingly hostile socio-political environment (particularly here in Europe), exacerbated by ongoing conflicts in the Middle East and the steadily worsening refugee crisis, Weizman’s project here gives an interesting angle into how we arrived at this point, and how we might need to reconsider the way forward.