February 10, 2016 By intsculpturectr in On View Tags: Jake Weigel 3 Comments

The pejorative use of “hippie” has long been the strategy of ad hominem attacks by social and political opponents of the American 1960’s and 70’s counterculture. Labeled as a slacker culture based on love and peace, donning tie-dye with starry, LSD infused eyes is the stock mental picture that still hangs over the era like the cloud of pot smoke. Beside this image, there was a new social movement and great music that remains a holdfast to the collective reality of the decades.

Prevalent art movements at the time included Minimalism, Pop, Op, Land, Conceptual and Land art, which shared values of the time albeit it in their seemingly disparate genres. Sociopolitical and eco-technological principles in combination with a heightened exploration of human perception made for a radical shift in art, design and architecture. Andrew Blauvelt, new director of the Cranbrook Art Museum and former curator at the Walker Art Center has compiled an extensive collection of information of this art and design from international sources to exhibit in Hippie Modernism: The Struggle For Utopia. 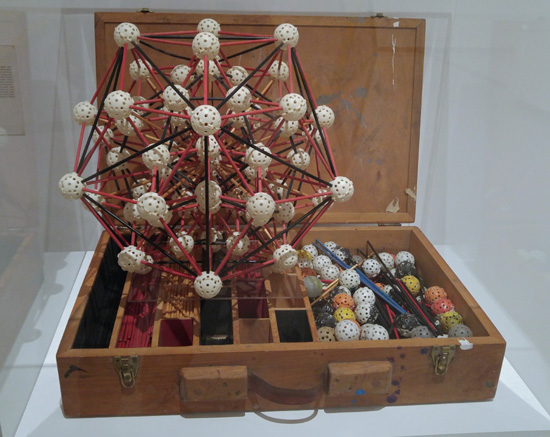 Throughout the exhibition communal efforts are seen as a pragmatic, intuitive and political methodologies in achieving the goals of the era. A substantial amount work from the design collective, Haus-Rucker-Co, highlights ideas from perception-shifting headgear to inflatable architecture. Robert Mandones’ Instant City is a video documenting the meeting of young minds off the coast of Spain in 1971 as they work together to create a temporary city. American efforts include California-based Merry Pranksters, the sexual revolution of the Cockettes, and later, documentation of Ant Farm’s Truckstop Network sojourn to New England with their “truckitecture” to demonstrate an early precedent of social media. Superstudio collective of several Italian artists who focused on Orwellian thoughts of negative utopias set in play by consumerist culture and escapism in a sci-fi role.

Newly developed computer-based technology and the promise of democratization through mass production was at the forefront of the era. With the endless possibilities the act of expanding the mind and abilities of perception seems an inherent parallel through not only art, but science, especially as the international race for the moon proved to be a major influence in popular culture. Technology has always contained the dream of a fast track to utopia and whether it was in idealistic goals or use of portable sound and video media, nothing appears to be left unexplored in the exhibition. 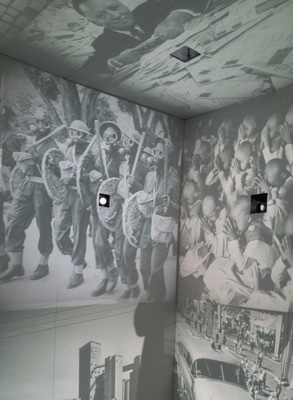 Prophetic statements are found throughout as is the influence on contemporary art. Ettore Sottsass’ lithographs illustrate surreal designs for future architecture not far from Roden Crater or The City. In 1962 Ken Isaacs’ The Knowledge Box offered a glimpse into current visual language culture bombarded with 24/7 media coverage and the Internet. Viewers are dosed with images from floor to ceiling with still images accompanying sound bites from the time in Isaacs’ box. Peter Cook’s Info-Gonks were 1968’s version of Google Glass, but designed for educational purposes rather than business or pure entertainment.

Among other possibilities was the sudden dissemination of information and much of the exhibit was dedicated to new approaches to education, sustainability and the interchange with everyday life. Stereotypical screenprinted music posters are on display, but show the masterful quality and investigation of design and color theory. Writing and art from the Black Panthers, feminism, the Whole Earth Catalogue and  Blueprint for Counter Education to Amsterdam’s anarchical Provo movement are an overwhelming source of information that is well-documented in the exhibition catalogue, a must read for a substantial understanding. 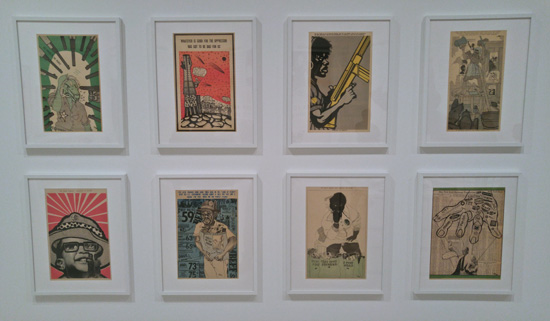 Blauvelt loosely organized Hippie Modernism into three categories around Timothy Leary’s line “Turn on, Tune in, Drop out” and it fits well as a mantra of the times. It works well. What the exhibition does the best, with prescient physicality, is demonstrate that the era of freethinking expansion of so many individual and cultural facets wasn’t all pipedream. Here that the core values of the American 1960’s and 70’s are still a driving force of politics, culture, art and design of today.

Hippie Modernism: A Struggle For Utopia is scheduled to travel from to Cranbrook Art Museum from June 19–October 9, 2016 and the University of California, Berkeley Art Museum and Pacific Film Archive, February 8–May 21, 2017.