I remember first seeing Cai Guo-Qiang’s Inopportune, Stage One at a party just after the opening of the newly remodeled Seattle Art Museum in 2007. I thought the flipped and rolled cars suspended from the museum’s ceiling and radiating flashing neon lights perfectly matched the atmosphere created by the buzz of chatter and the DJ’s continuous beats. At the time, I had no idea who the artist was or that these cars were meant to simulate a car bomb going off, yet I liked the installation for its eye-catching originality. 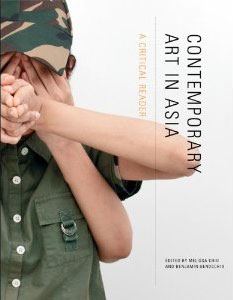 Cai would go on to a solo exhibition at the Guggenheim Museum in 2008. The same year, another Asian artist, Takashi Murakami, had his first solo show in New York at the Brooklyn Museum. According to the Asia Society Museum’s Melissa Chiu and art critic Benjamin Genocchio, these two exhibitions marked a turning point in the perception of “Asian art” in the West. Asian contemporary art in the West was finally on the same level as work created in Europe and the U.S. Or at least that’s what Chiu and Genocchio would have us believe.

Through a series of essays categorized both by theme and chronologically, Contemporary Art in Asia traces the historical discourse of Asian art since the 1990s. The breadth of topics, authors, regional studies, and viewpoints could not be better curated. Starting with the question of what “Asian” means and ending at the increasingly globalized notion of the avant-garde, discussions of politics and culture interweave those of contemporary art.

One essay that I found particularly interesting (and timely) was art critic Lee Weng Choy’s “Biennale Demand” (2008). Lee’s main contention is that biennales have historically been used to showcase non-Western contemporary art, often being the only prominent outlet for its presentation. Lee uses the word “demand” in both the sense of demand for more biennales and non-Western art in general and the demand which biennales as exhibitions and institutions make upon their audiences. In other words, what is the viewer supposed to take away from a biennale? Lee points out that because biennales are inevitably organized by nation, they create the problem of perceiving ethnicity as geography, or “ethnogeography.” (This should come as no surprise. After all, the first biennales roughly coincided with both the first world expos and the revival of the Olympics—all of which were manifestations of the rise of the nation-state in the late-1800s.)

I find the issue of “ethnogeography” a particularly interesting topic of discussion, as it is relevant not only to biennales and other international festivals and competitions, but also to the question of what the word “Asian” actually means. Is it a geographic connotation, and if so, is Russia “Asian”? What about New Zealand? If it’s more a historical category—as champions of postcolonial theory would argue—what of Thailand, a country that was never colonized by the European powers? Or China and Japan, historically colonial powers themselves? And in the art world, is “Asian contemporary art” that much different from other continents’ contemporary art, especially if one considers diaspora communities?

This brings me back to Cai and Murakami. How “Asian” are they really? If someone who had never heard of them were to see their art, would it be recognized as “Asian”? And, more importantly, does this really matter? I would argue that in Cai’s case, his artwork has more of an international or cosmopolitan feel to it and, although his culture and upbringing no doubt influence his work, it is not immediately recognizable as “Asian.” As for Murakami, because his work is inspired by manga and Edo (two styles instantly identifiable as Japanese), the viewer might assume the artist to also be Japanese. But the question remains, is Murakami’s art also “Asian” or just Japanese?

Now to the second question: Does all this really matter? In a sense, it only matters that finally non-Western contemporary artists are receiving a much-deserved recognition in the West, which is always positive. To what extent these artists are pandering to Western tastes is a more convoluted issue. After all, even Murakami’s unmistakable “Japaneseness” is also inspired by Andy Warhol and endorsed by Louis Vuitton and Kanye West. As for Cai, interviewers from the West are constantly pestering him with questions of dissidence and politics in contemporary China—questions he often leaves unanswered. In the end though, the concept of “Asia” seems to be a lot more important to those living outside than within its supposed boundaries. This, I would argue, is why Chiu and Genocchio are a bit overly optimistic when they imply that Asian art is now on the same level as European and American art in the West. As long as the West (including myself) continues to see contemporary art coming out of Asia as “Asian” and not just generally as contemporary art, the discrepancy will keep Asian artists in a separate-and-inherently-unequal category. We’re slowly getting there, and 2008 was a great year for contemporary artists from Asia, but we have quite a ways to go before we see the “Asian” naturally dissolve from the Western category of “Asian contemporary art.”