December 29, 2010 By intsculpturectr in Book Reviews, Surveys Leave a comment

This is an unusual art book, although it is certainly “lavishly illustrated,” as they say, in color and black and white photographs by Roxanne Everett. What’s different is that Lippincott uses his experience running the first industrial-scale art fabrication business, Lippincott, Inc., as a lens to view one of the pivotal periods of modern and contemporary art, 1960 to 1980. The book stops in 1980 because of Everett’s departure from the firm, though there is a small supplementary section concerning more recent work.

Lippincott’s premise works because among his customers were Robert Indiana, Ellsworth Kelly, Louis Nevelson, Barnett Newman, and Claes Oldenburg, among many others. The book is mostly photos and captions, but they document not only finished works but the process of construction and the interaction of artist and fabricator. 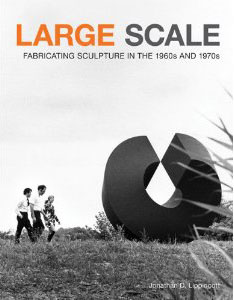 The era covered in the book was perhaps the prime period for artists moving toward fabricator-constructed sculpture but still maintaining their own participation in the projects. Prior, that is to say, to the more contemporary work by artists who send the work out to be fabricated and only see the work when finished.

So though this is a partial history of contemporary sculpture, but a very telling and interesting one, for artists as well as others interested not only in the period of time covered but also in the process of creation, the partnership of artist and fabricator, and the making of some of the most important sculptures of our time.